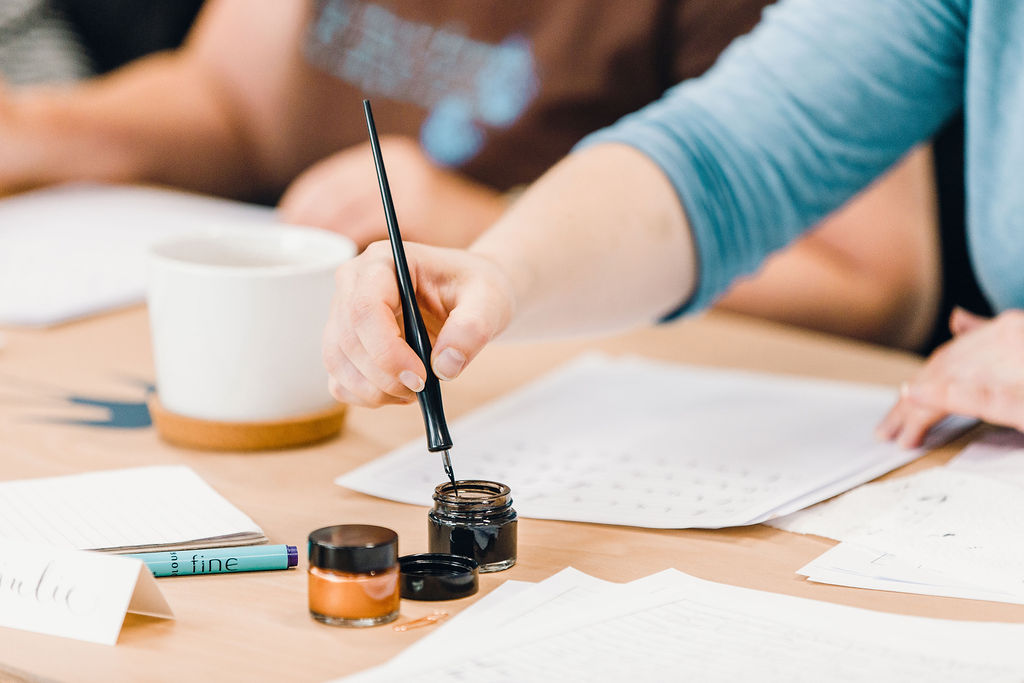 If I wasn’t an optimist, I don’t know how I’d do February! But I’m felling all the joys of spring and so excited for the month ahead. We have birthday secret surprise adventures aplenty (two MAJOR birthdays in our family this month) and lots of calligraphy projects I’ve been a busy bee with in Jan are just about ready to share!

First on my schedule is my new Etsy wedding shop launch. I set up my Etsy store in *goes to check* 2013!! So we’re seven… and need a bit of a refresh because some of my oldest products have been on there for quite a few years now! Lots of goodies are currently floating around my calligraphy studio, and I’m excited to get them in the shop!

Then there are workshop plans to finalise: I’ve got full-day calligraphy workshops in Coniston and Nantwich to plan for, and my Manchester calligraphy classes are almost fully booked (a couple of places left in April; March is sold out). So I’m really excited for those!

I’m pretty good with work-life balance these days, so weekends and evenings are spent notworking. (I love how my phone automatically changes that to networking, because it knows I’m on instagram and generally talking about calligraphy and weddings… haha.) But no – weekends and evenings are perfect crafting time, and I have lots of little projects on the go with the latest being clay coasters and dried flowers. Somehow, they WILL go together. No idea how… any tips?!

While it’s chilly outside I’m totally still nesting. Every now and then we head out to the beach to get all windswept and red-cheeked, and then come in, bang the fire on and snuggle with a hug mug full of hot chocolate. Or a whiskey. (Anyone tried Smokehead?) So yeah – spring’s in the air, but I’m sure we’re still to see snow, and there’s no way I’m stashing my jumpers away just yet! 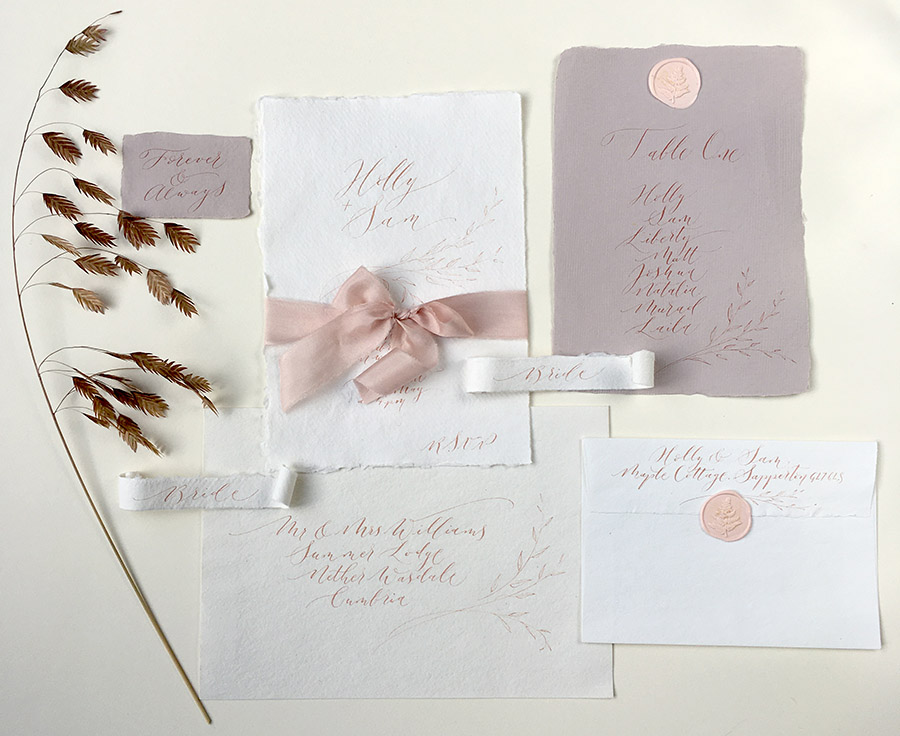 For new wedding stuff, head over to my Etsy shop Etsy.com/shop/bymoonandtide

To see all my crafting failures, watch my Instagram stories! They’re bound to happen… and I believe in keeping it real on there, so I post everything, even the less successful experiments!

We are so lucky to live in the online age. We type more often than we write.

Calligraphy now is an art, a skill which takes years of practice to develop to a professional level.

But did you know that writing a beautiful calligraphy script was once as important to building a career – any career – as computer skills are today? 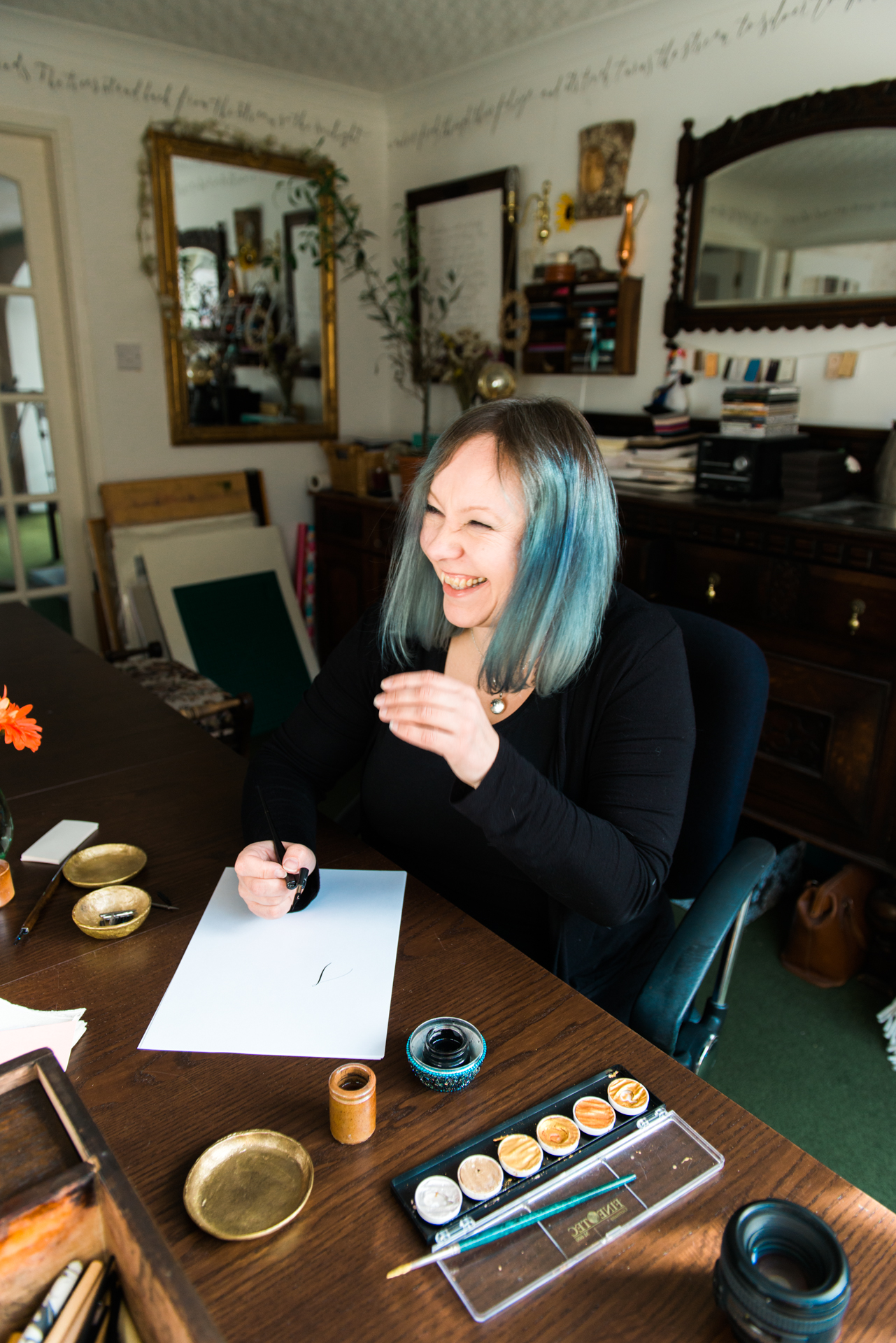 In the early 1900s many books were written on the subject of penmanship for business. They are fascinating to read now, not just because we no longer write this way in our daily lives, but because the scripts and examples they include are so intricate and graceful to see.

I can’t begin to imagine how much a solicitor would have charged, a hundred or so years ago, to notably represent his clients in court but also to present written documents in the most exquisite hand calligraphy.

And imagine, if you wanted to apply for a job as a solicitor – how beautifully you’d have to write your CV and covering letter?!

I smile to think of a 21st century bank manager trying to write letters in Spencerian calligraphy. I’d love to see a 1900s businessman compare his handwriting with that of, say, Mark Zuckerberg…

More than anything, I’m proud to be part of a new calligraphy era; young men and women all over the world are picking up pens and creating art for pleasure; lettering is no longer the province of rich businessmen, but a craft enjoyed by tens of thousands of artists all over the world.

You can see examples of rare calligraphy books at www.Iampeth.com 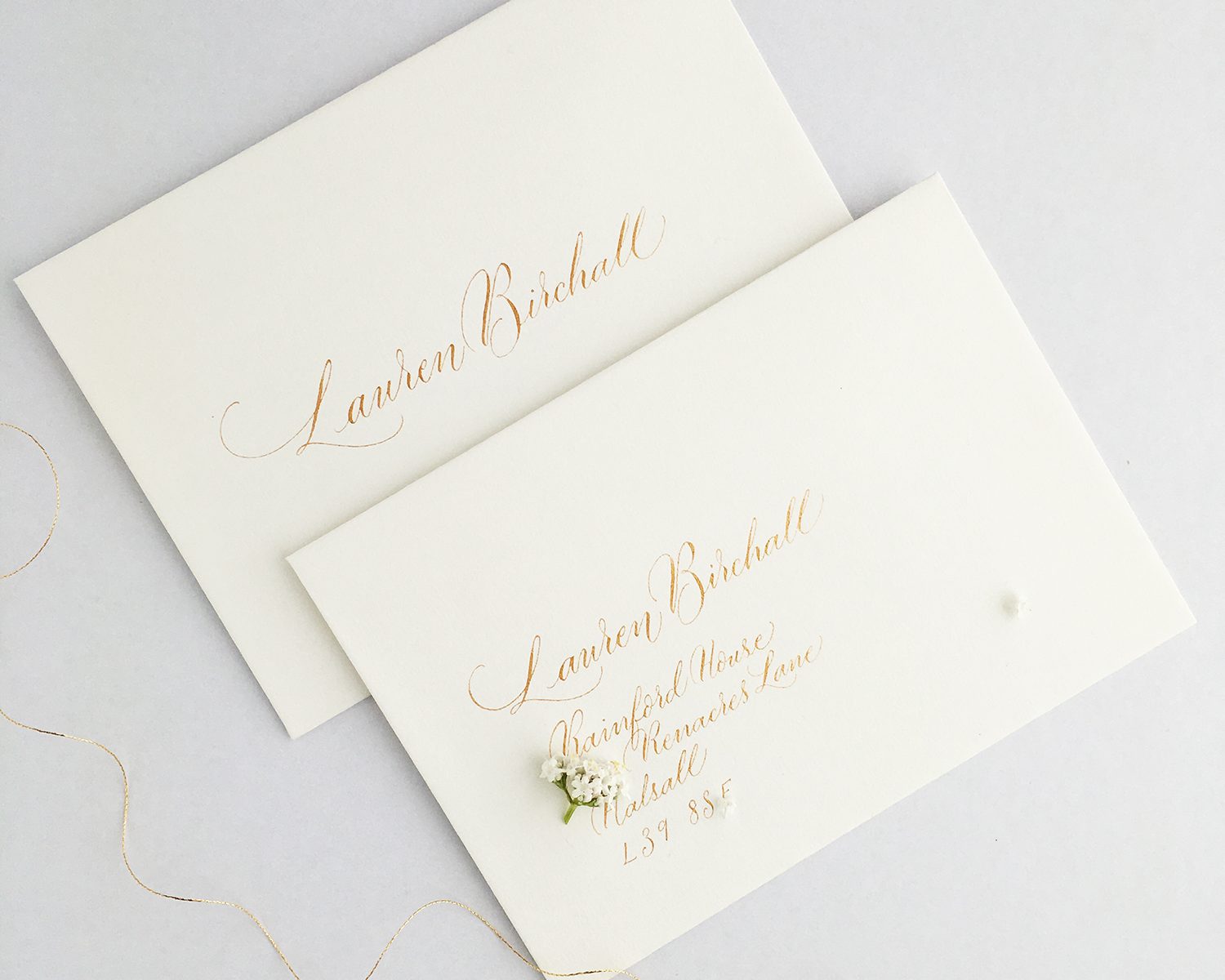 Lovely Lauren asked me about gold calligraphy addressed envelopes for her wedding, and these are the samples I addressed for her this week.

Some envelopes are more suitable for calligraphy than others. These are absolutely perfect – they’re a GF Smith paper stock, and work wonderfully with the gold ink. 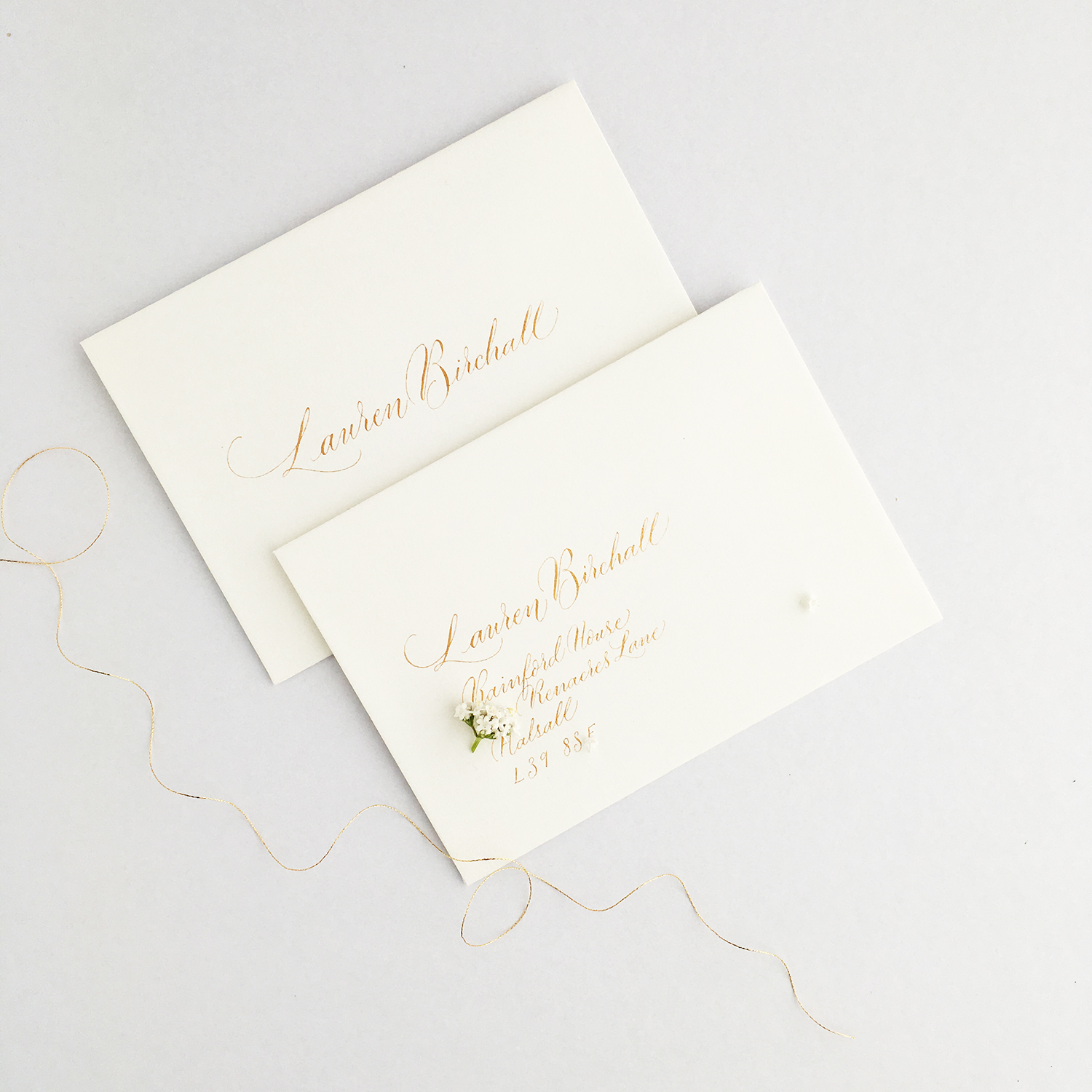 Thank you to lovely Ellie from Silk Beau for the samples to test. I do so hope to be addressing more of these for Lauren soon!

In my last blog post I explained about calligraphy pens, how they work and the different types. Today let’s have a look at the nib itself.

Nibs are pointy little silver magic wands. A genius combination of design and gravity makes a pointed calligraphy nib one of my favourite inventions in the world.

The curve of the nib is what holds the ink up. It’s a simple trick of gravity, surface tension and viscosity – you can even ‘scoop’ ink up with your nib as if it were a spoon!

Modern calligraphy nibs are split down the centre, and the two halves of a nib are the ‘tines‘. Ink flows down the centre slit to make marks on the paper.

As pressure is applied to the tip of the nib, the tines split and it’s the distance between them which determines the width of your letterforms.

The final part of a nib is the vent. This is a tiny hole in the centre of the nib, designed for air and ink flow – but actually forming a magic little ‘window’ to indicate when ink is about to run out. Just before you need to re-dip your nib, the ink in the window will  ‘pop’ like a bubble, leaving the window clear.

Calligraphers are generally serious, quietly academic types. Or were, in the days of formal lettering required to be a ‘proper businessman’. However, I’m blessed with a childish sense of humour I should have grown out of twenty years ago.

I’m going to take you on a journey from shaft to flange, via tips and teeth, to explain how a calligraphy pen and nib set both looks and works. Apologies for any puerile content – blame the manufacturers!

Let’s start with a basic, straight dip pen. These are mainly used for old-school italic, roman and gothic calligraphy, but can work for modern calligraphy too. I should clarify: when I talk about modern calligraphy I mean all those loose variations of very informal copperplate, made with a ‘pointed’ pen (i.e. nib).

So the dip pen is simply a straight shaft of wood or plastic, with a slot at the wide end in which the nib is inserted. Some dip pens have a circular or semi-circular groove cut into the end – your nib will just slot into this until if feels firmly held. 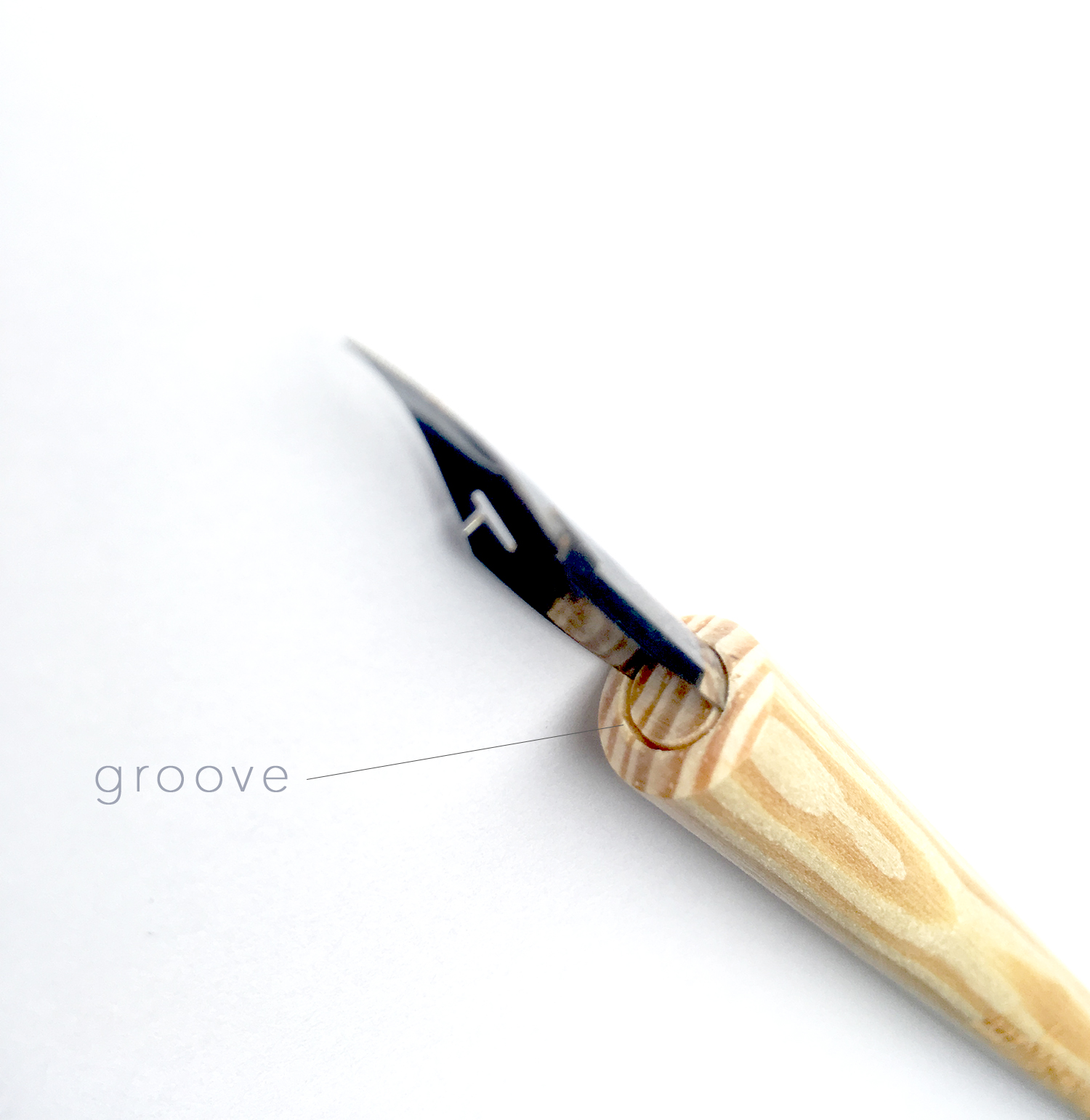 Others have teeth – but ignore those! Your nib should slot into the circular gap around the outside of the teeth (as shown in the photo below). 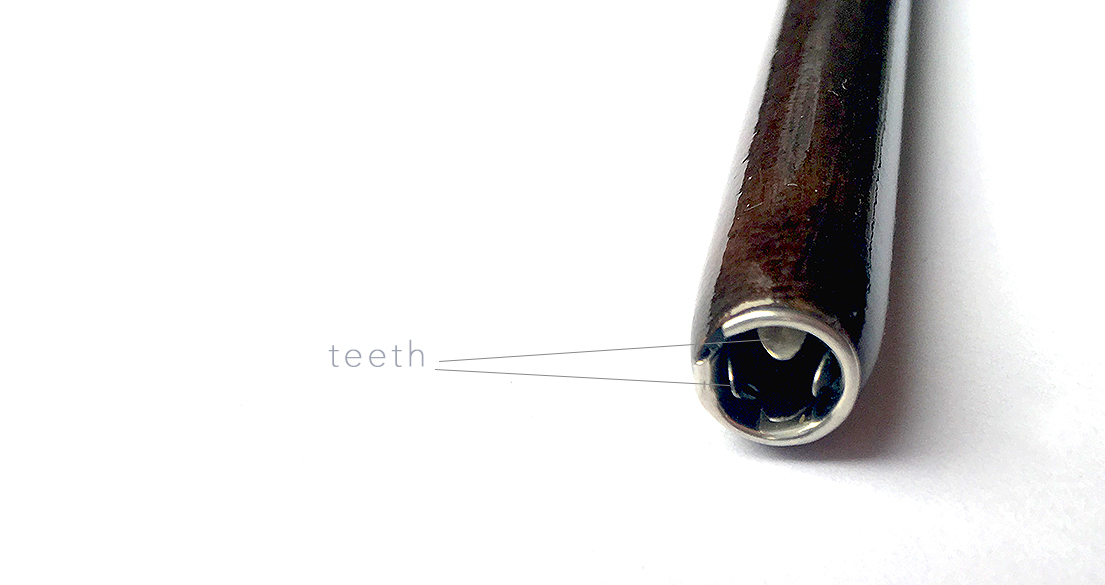 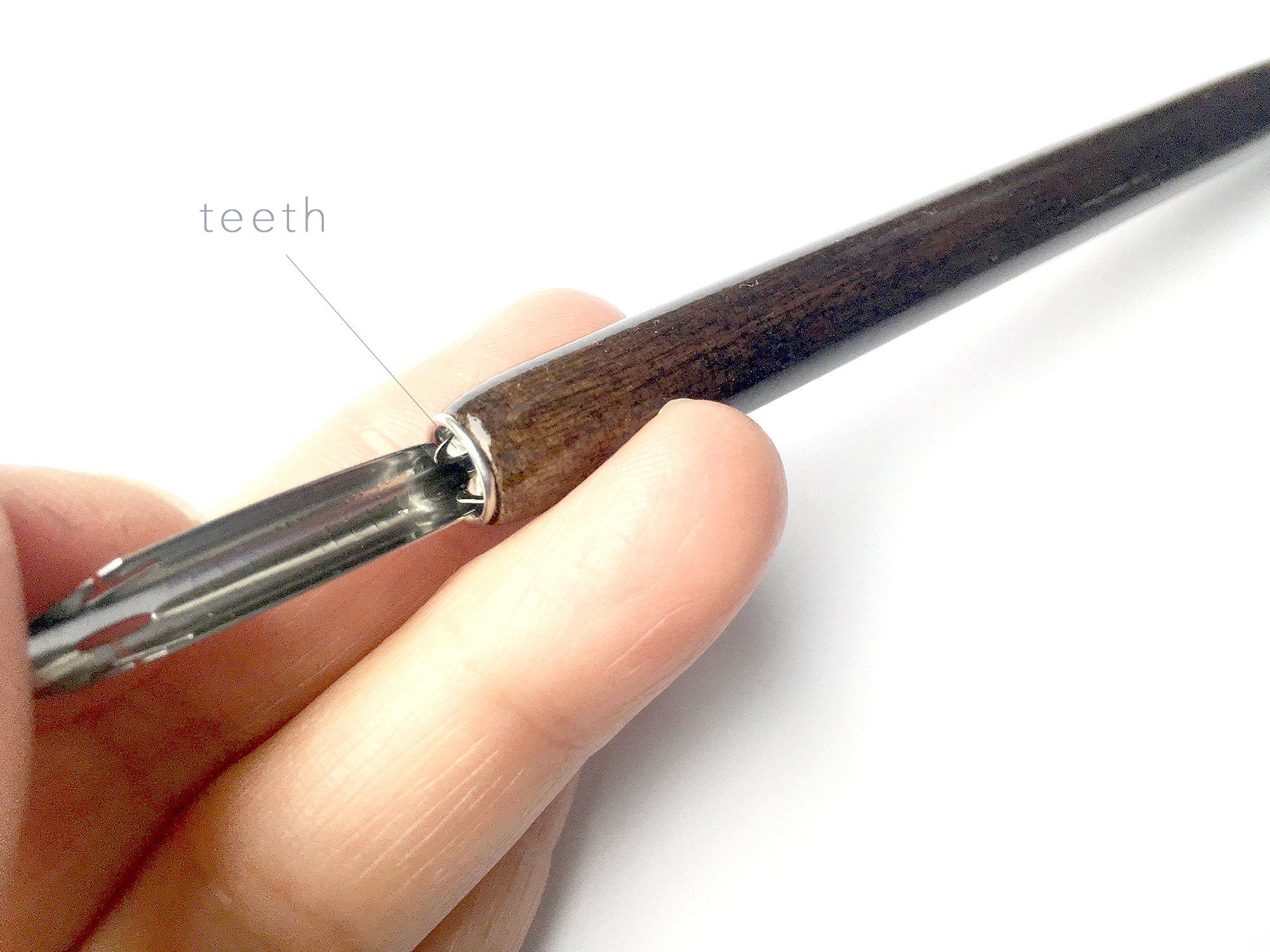 With a straight pen, it can be tricky for right-handers to achieve the correct pen angle for modern calligraphy lettering. This is why the oblique penholder exists. The extra piece (flange) on the side of an oblique penholder always sits to the left, and means your nib will point more to the right than it would with a straight pen. Oblique holders look trickier than they are. Try one and see!

Buy a modern calligraphy starter kit and begin your calligraphy adventures today! These include the oblique penholder I use every day!

I’m super happy to tell you my NEW & IMPROVED modern calligraphy set is now available to buy in my Etsy shop. 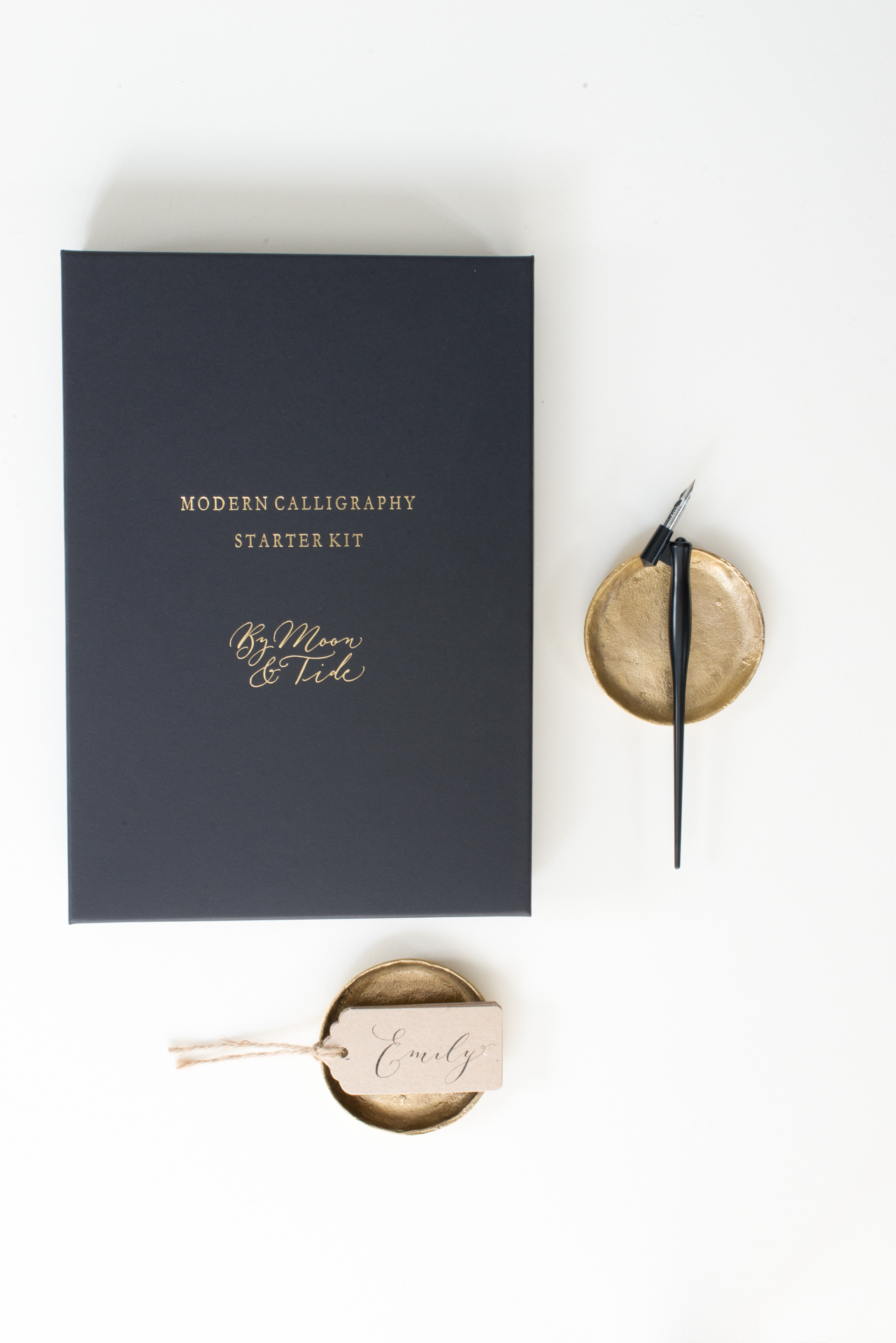 I’m so proud of this kit – we’ve sold them worldwide to calligraphy beginners and crafty folks, on Etsy and Not On The High Street – I think they’re the best modern calligraphy sets around.

Designed for absolute beginners, my calligraphy set includes pen, nib and ink; a 32 page instruction book full of letters, exercises and tips; a personalised journal with your name on, a set of gift tags, practice papers and a brush lettering pen. It’s all beautifully presented in a gold foiled gift box – perfect for birthdays! 😉 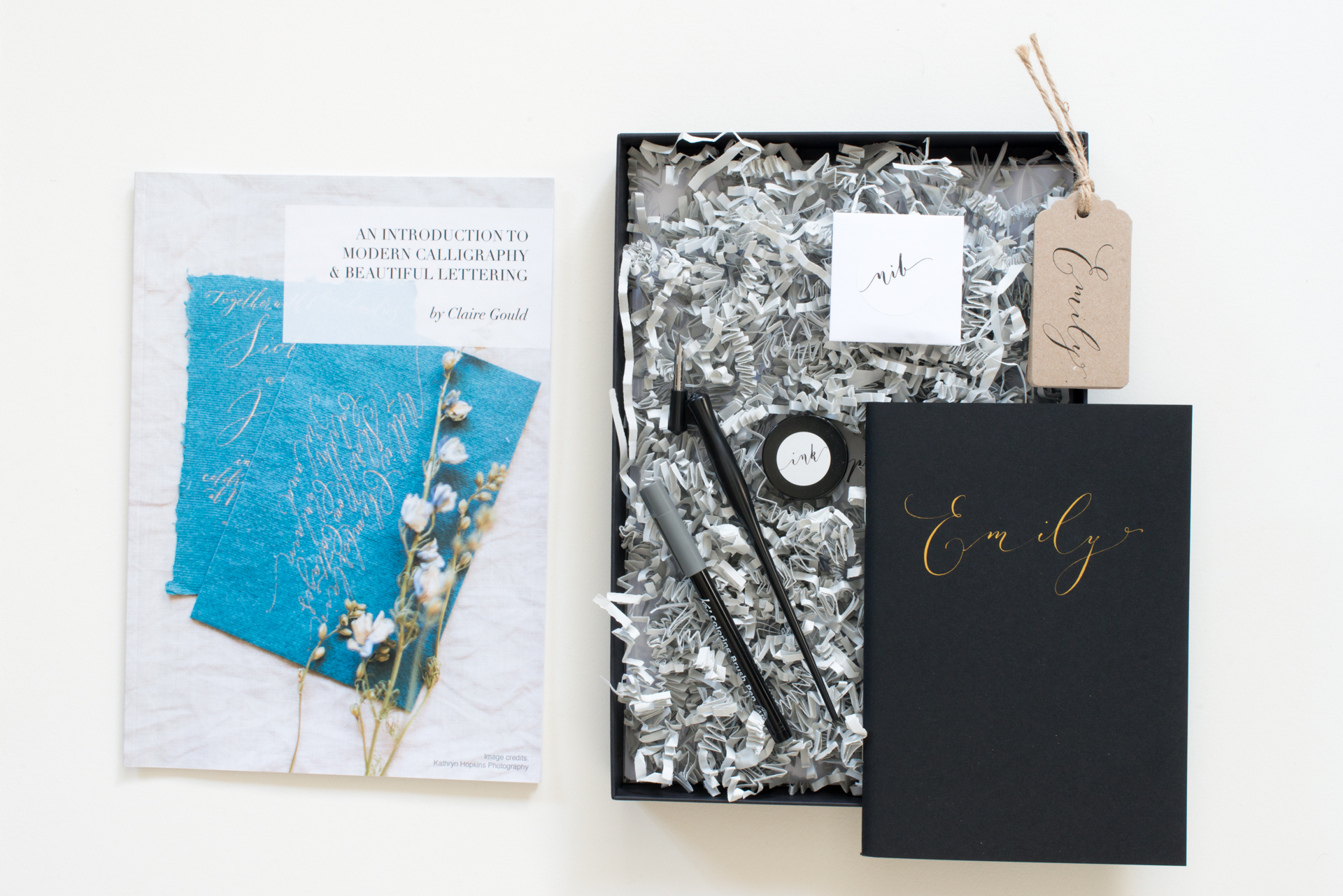 The price is £65 and you can buy the modern calligraphy kit either from my Etsy shop or on Not On The High Street. 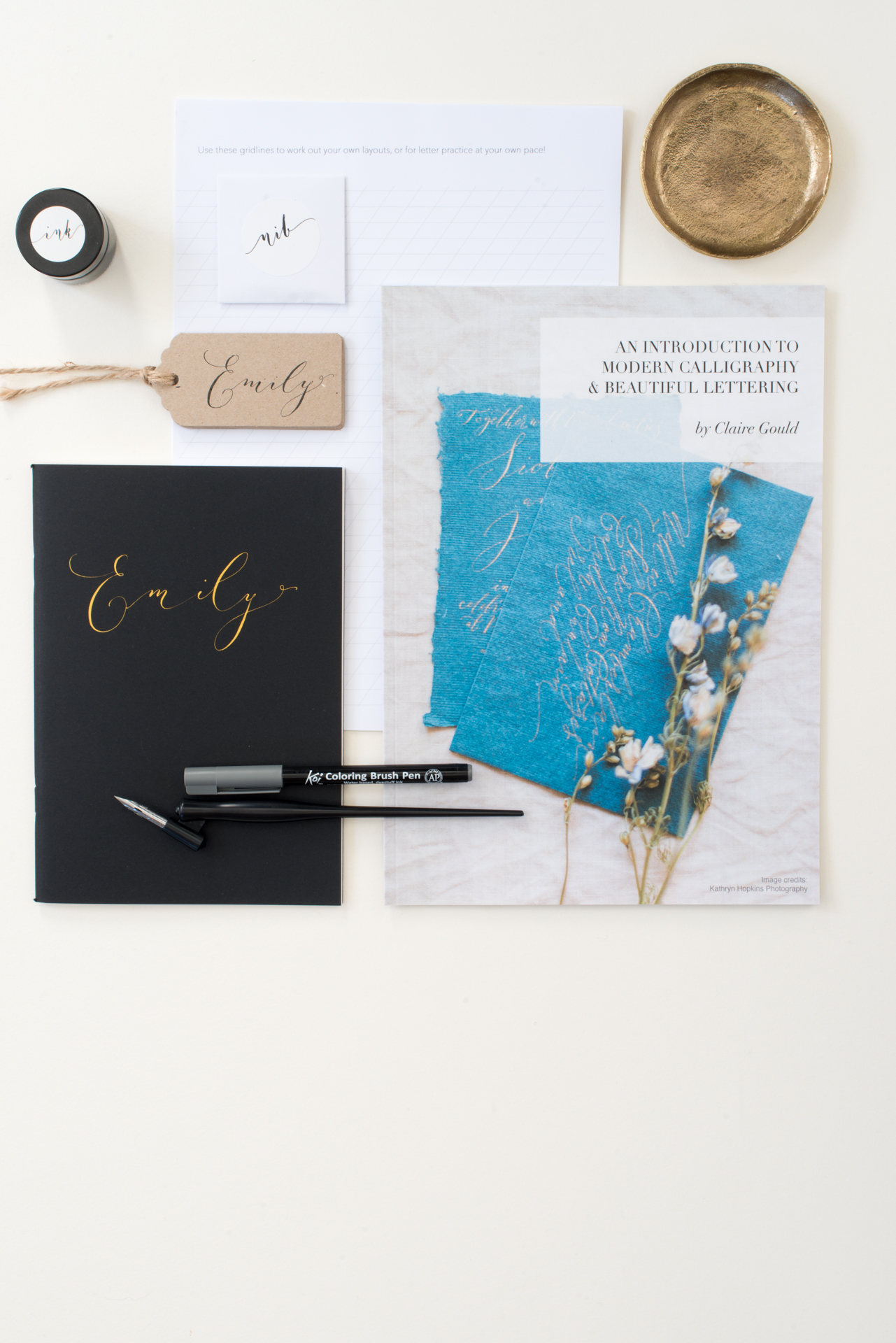 Massive thank yous to lovely Jenny Jones Photography for the new photos too!

If you’d rather learn calligraphy in person there are spaces available at my Manchester calligraphy workshop on Saturday the 26th of May. Come & join me! Details here: www.etsy.com/uk/listing/553429806

I’m really excited to have new calligraphy workshop dates for 2018 to share with you! 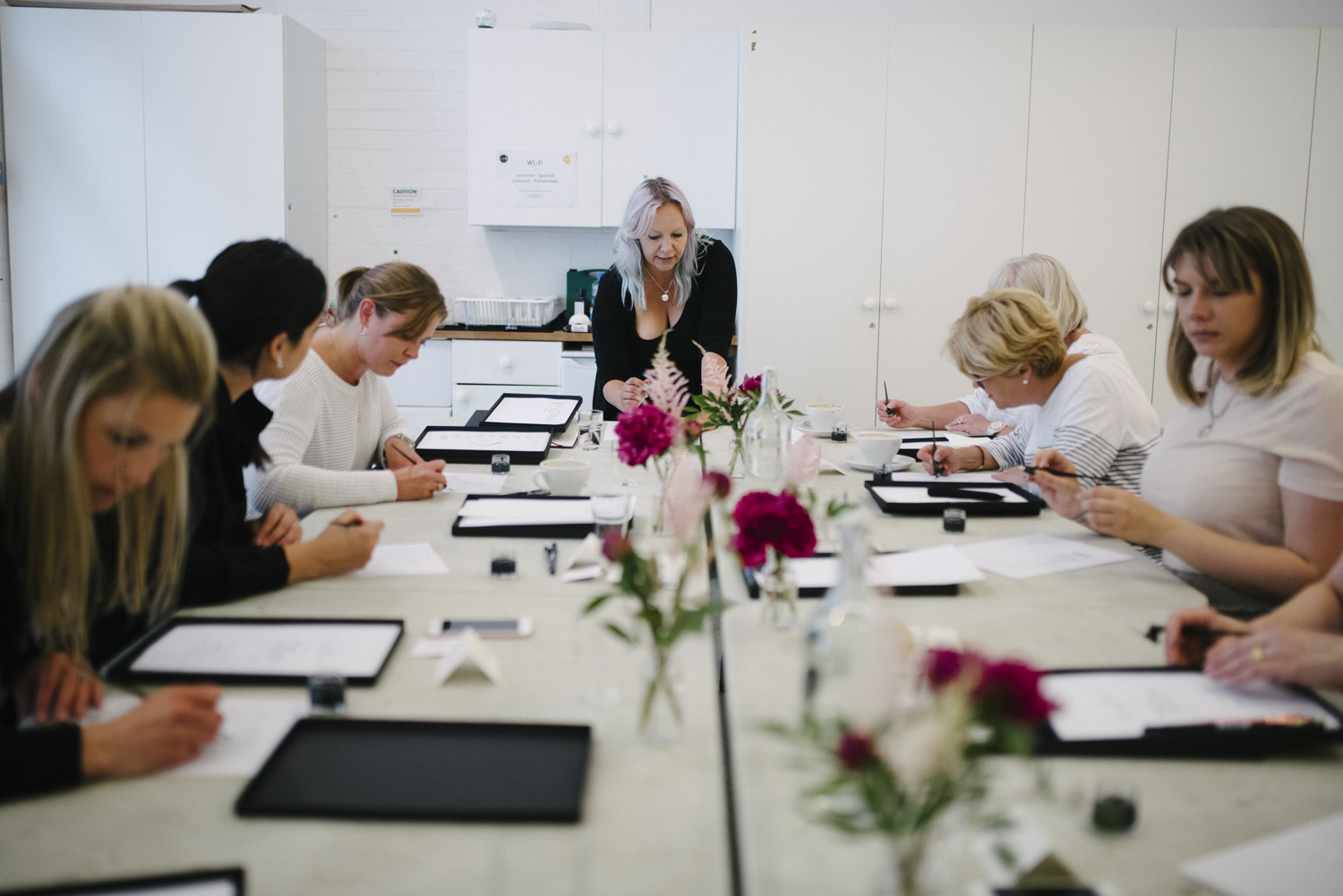 We have Saturday dates as well as Fridays now, and the calligraphy classes are spread throughout the year with a little break in the summer.

Classes are perfect for absolute beginners who want to try calligraphy for the first time. Bring along your mum, your friend or your partner and enjoy a relaxing afternoon learning a new skill!

All workshops begin at one o’clock and finish at half past three. Click the links above to book, or see all workshops. 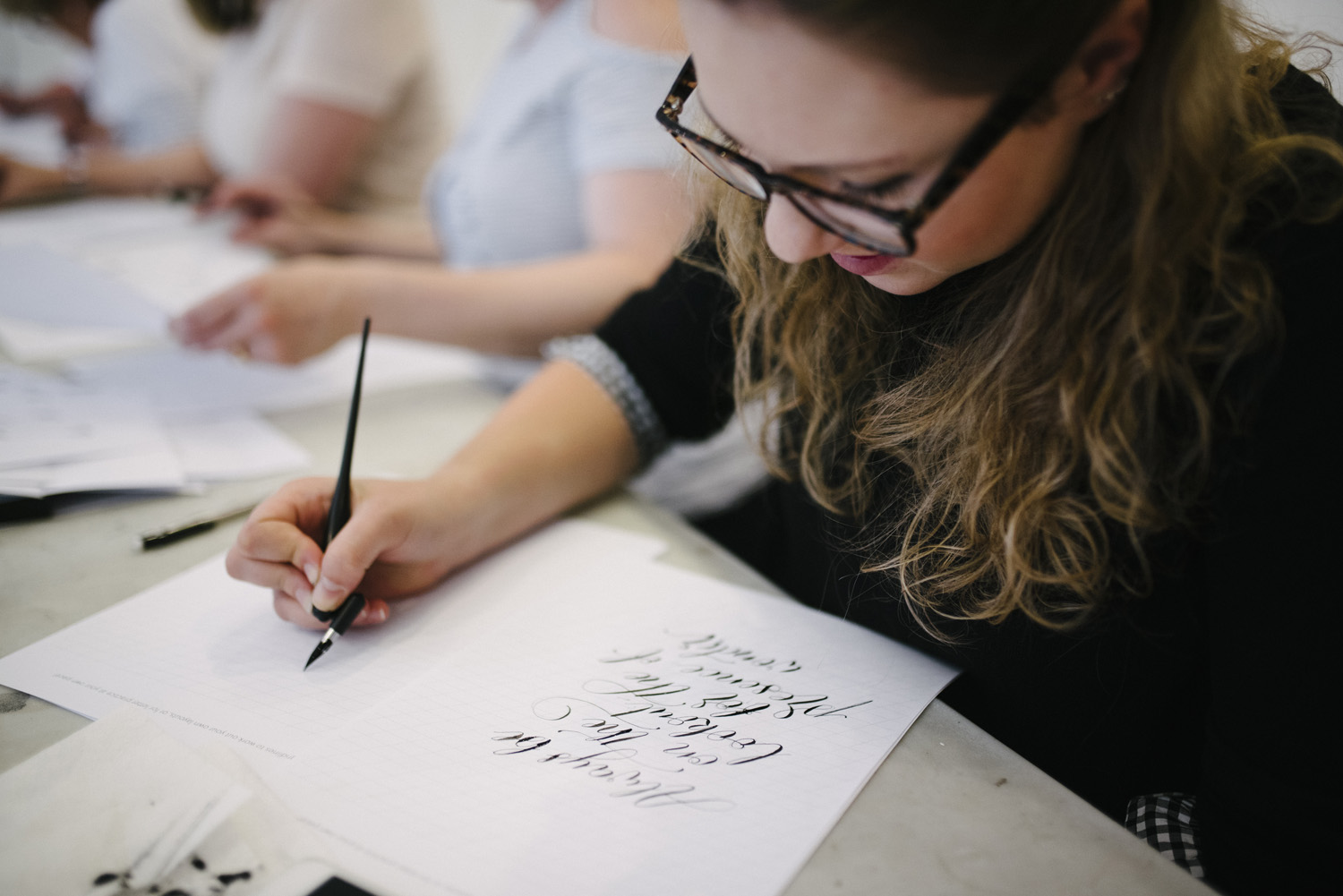 These calligraphy workshops are all in Manchester’s Northern Quarter, at the wonderful Craft & Design Centre, for easy accessibility from anywhere in the north of England.

To hire me to teach a calligraphy class in any other UK location please get in touch. I’m very happy to travel to new places and share the art and enjoyment of learning modern calligraphy!

Thank you to Inbetween Days Photography for the beautiful images of one of my 2017 workshops!

Trends in calligraphy change as often as the seasons. In one of last month’s blogs I talked about learning a loose, organic lettering style – all by changing the joining strokes and flow of a basic modern calligraphy script. Organic lettering has been hugely popular in 2017 – but I know from experience that next year I’ll be writing something very different.

Calligraphy appeals to so many people because it’s easy to learn (with a little guidance at first!). It’s the joy of learning which attracts us to the art of lettering and consequently those who practice calligraphy are endlessly looking to improve, to progress. 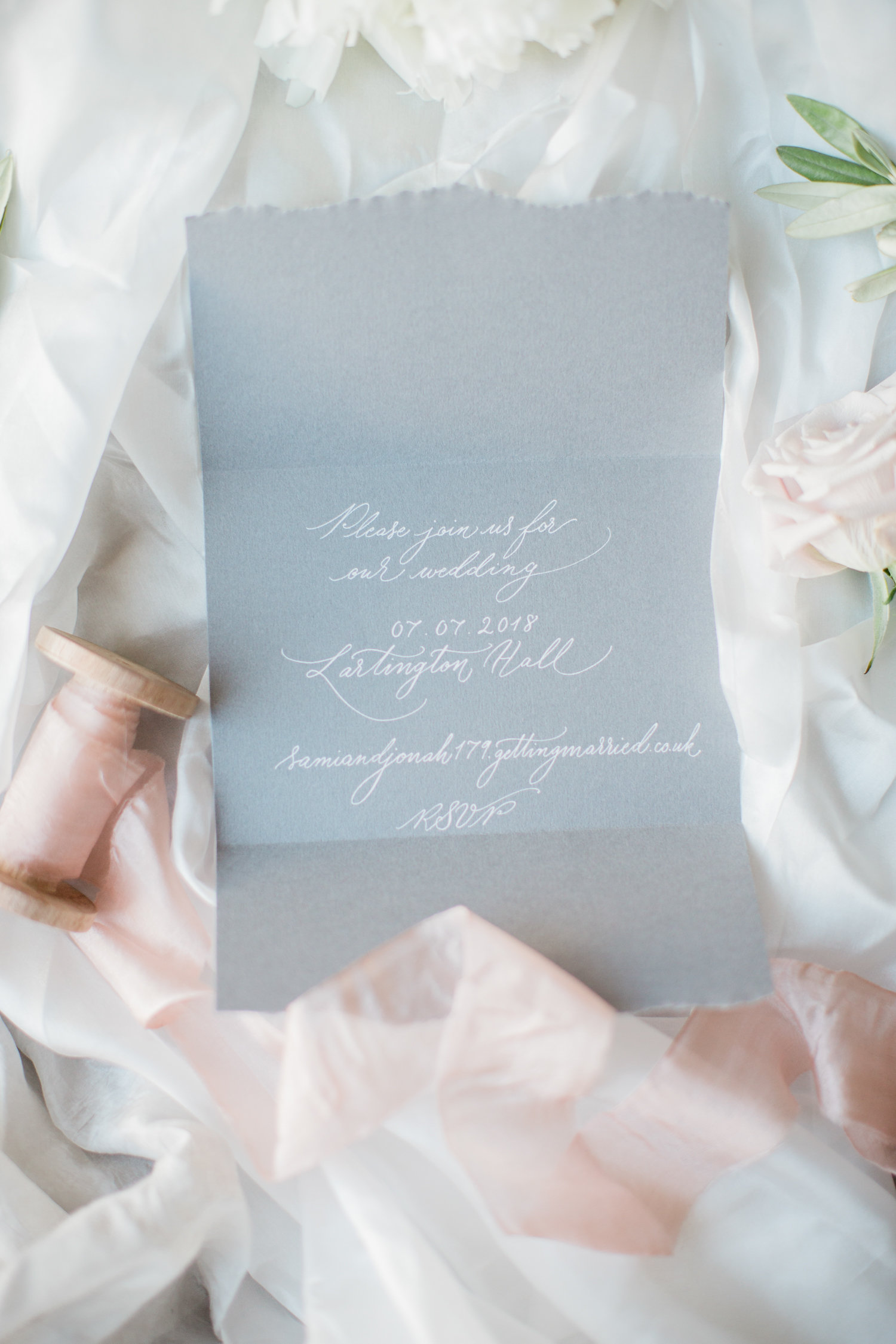 It’s this that makes being a calligrapher in 2017 so fascinating. I can never rest on my laurels as a modern calligrapher – I’m always looking for the next trend in style, in technique or in writing surfaces. 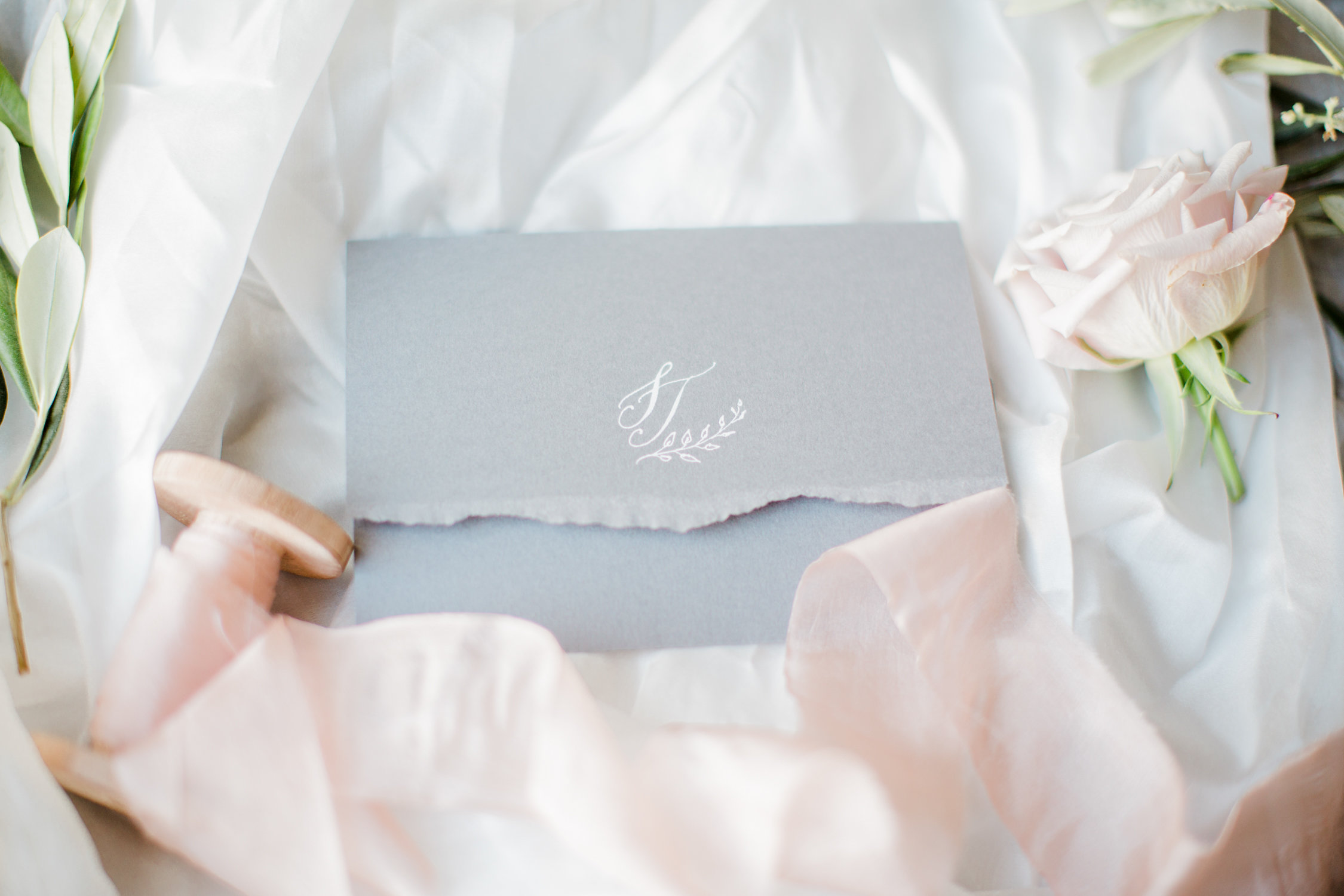 If you’ve just begun your calligraphy adventures, do enjoy the journey. It will never grow old! 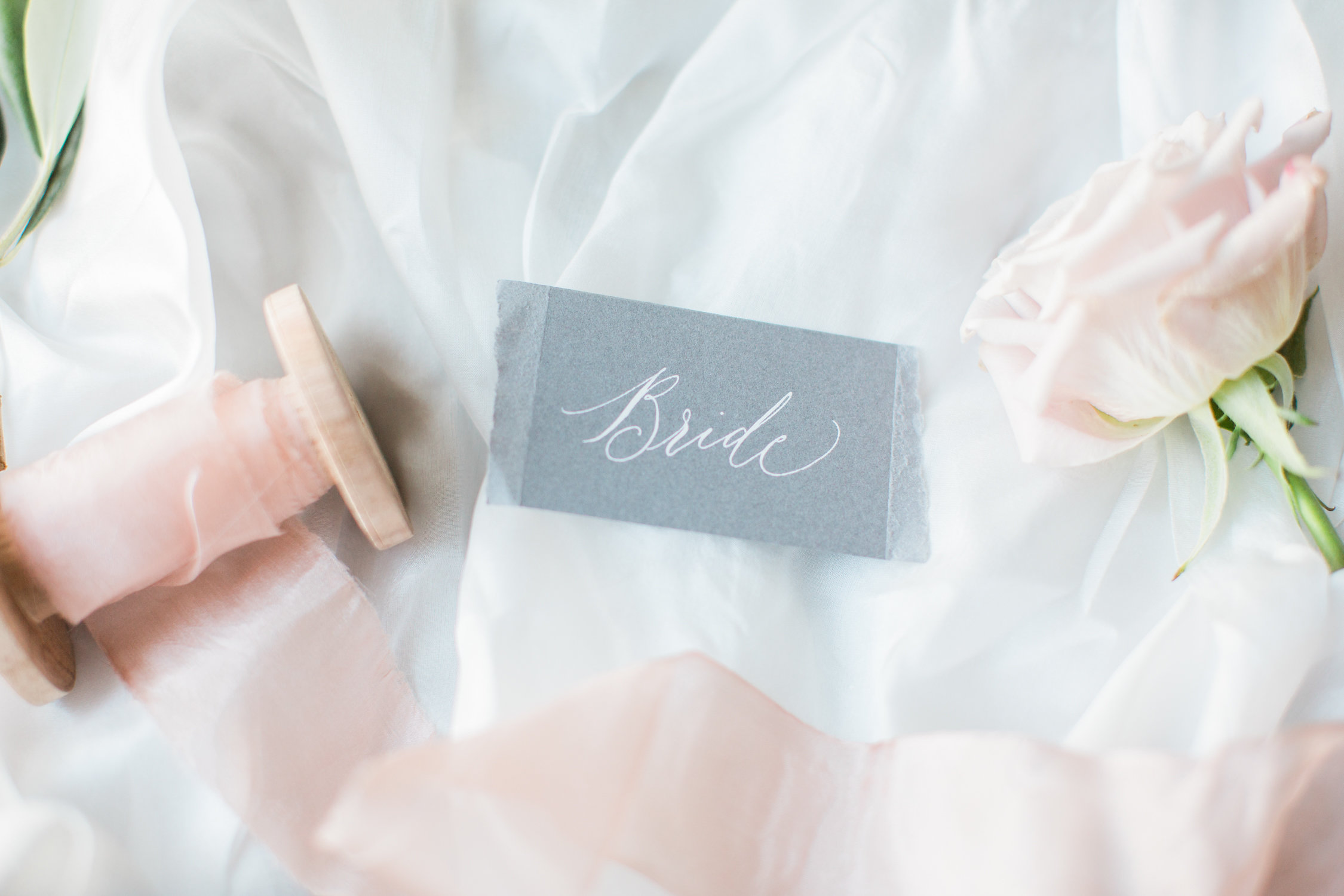