I can feel my calligraphy style beginning to change – my influences are evolving and so is my lettering.

The thing is, you always learn. With calligraphy there’s never a ‘perfect’. Fashions and styles change, and there are so many styles out there, there’s always another which tempts me.

So I’ve been watching videos by master calligrapher Paul Antonio, by Suzanne Cunningham and by Ashok Giri. These guys write slowly and beautifully, and in more traditional styles.

And even as I write modern letters, I’m slowing down and thinking more while I write. The temptation with modern calligraphy is to rush things. And while a wayward stroke or two doesn’t matter so much in this style, a carefully planned, uncrushed wayward stroke can make all the difference.

Come and learn modern calligraphy with me! 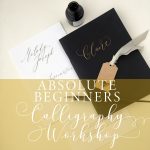