I should really blog to remind myself what I’ve done so I can look back at the year and see what I’ve achieved, rather than coming to write a post like this and knowing I’ll make some things up… or forget, or get dates wrong. 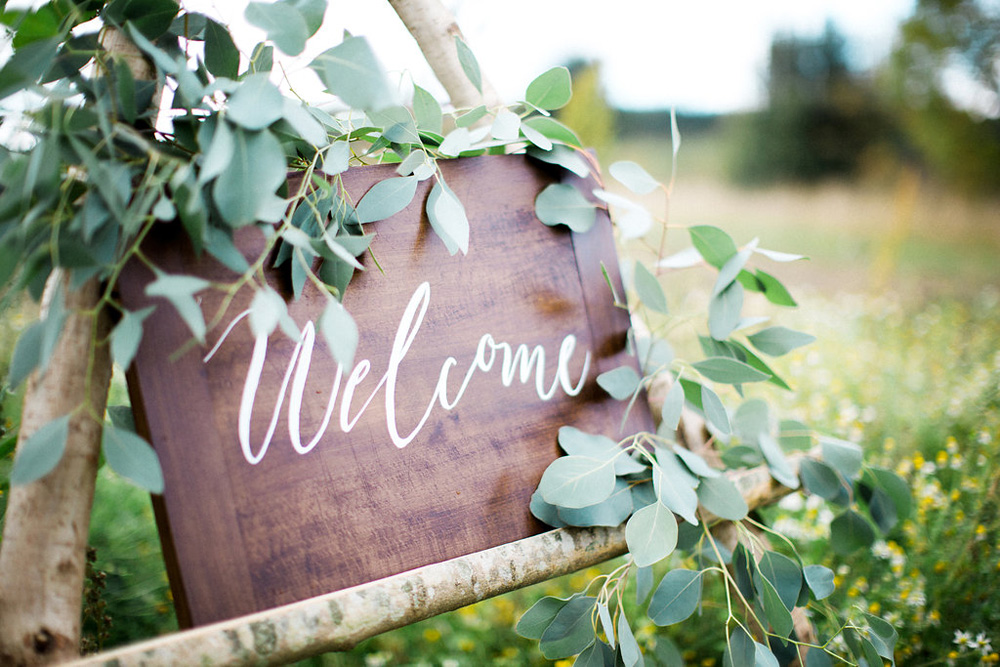 So here, a half-remembered calligraphy journal and review of the year just passed.

Last year’s resolution was to ‘do more shoots’ and it worked. I shipped samples all over the UK and now have some amazing images of my work to show for it.

I realised I love shoots. They’re challenging creatively, the wait for images is exciting and even when I can’t be there on the day it’s great to network with other creatives. I have met some fab photographers and stylists along the way, people who I find inspiring and will be happy to work with again. 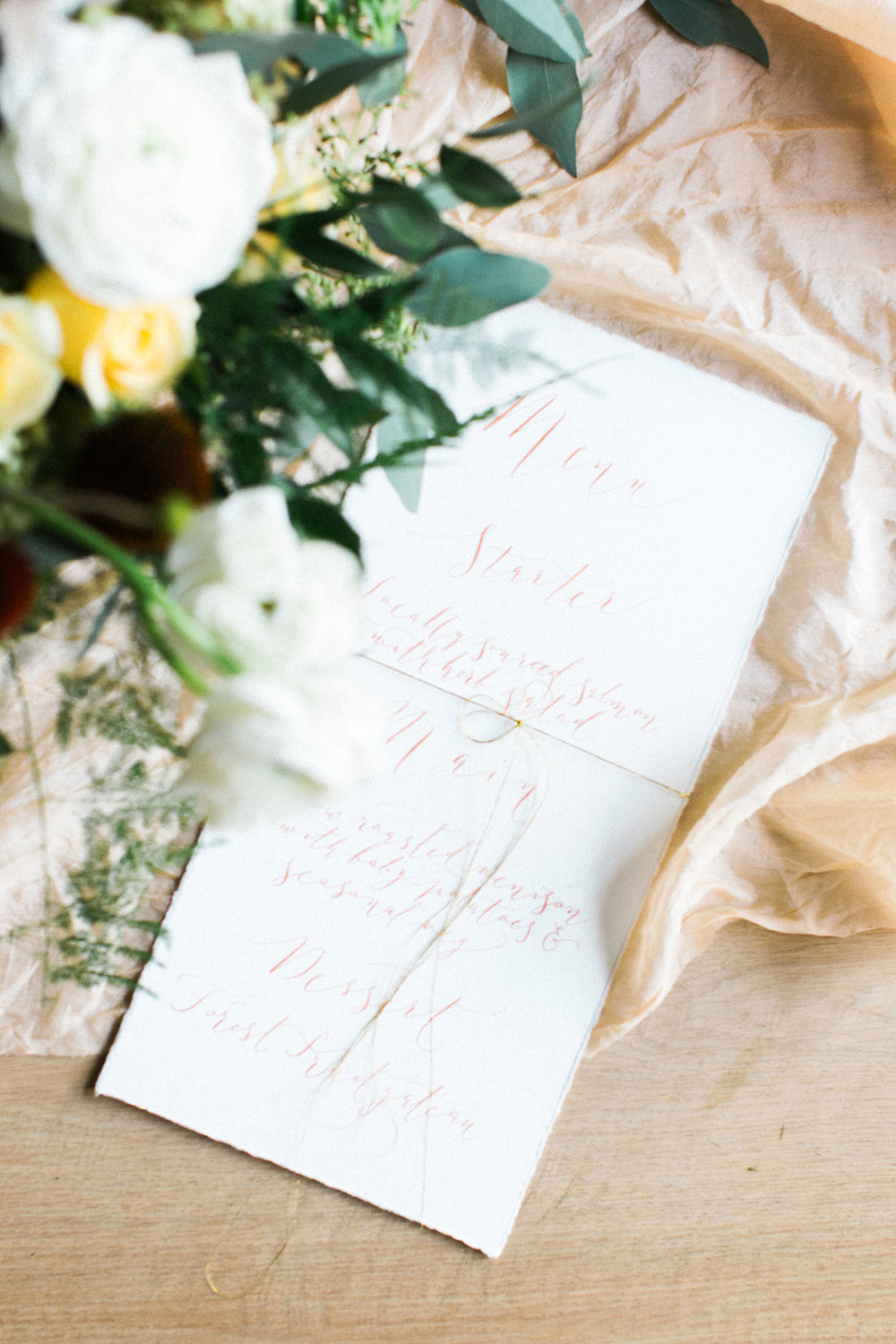 When I wasn’t creating new designs for shoots, my day to day calligraphy work carried on much as it always has with envelope addressing, naming invitations and a scattering of bespoke commissions from early in the year.

A notable addition was my Not on the High Street shop, which brought in extra pocket money at the beginning of the year especially. The top selling item there was – until November – ‘Will you be my bridesmaid‘ cards. I tried calligraphy kits and pens, one poem print and some wedding stationery: very much testing the waters for NOTHS so far. Their T&Cs are very strict so I didn’t want to overcommit especially in summer.

In the end this wasn’t a worry so I will look to sell more via their website in 2016. 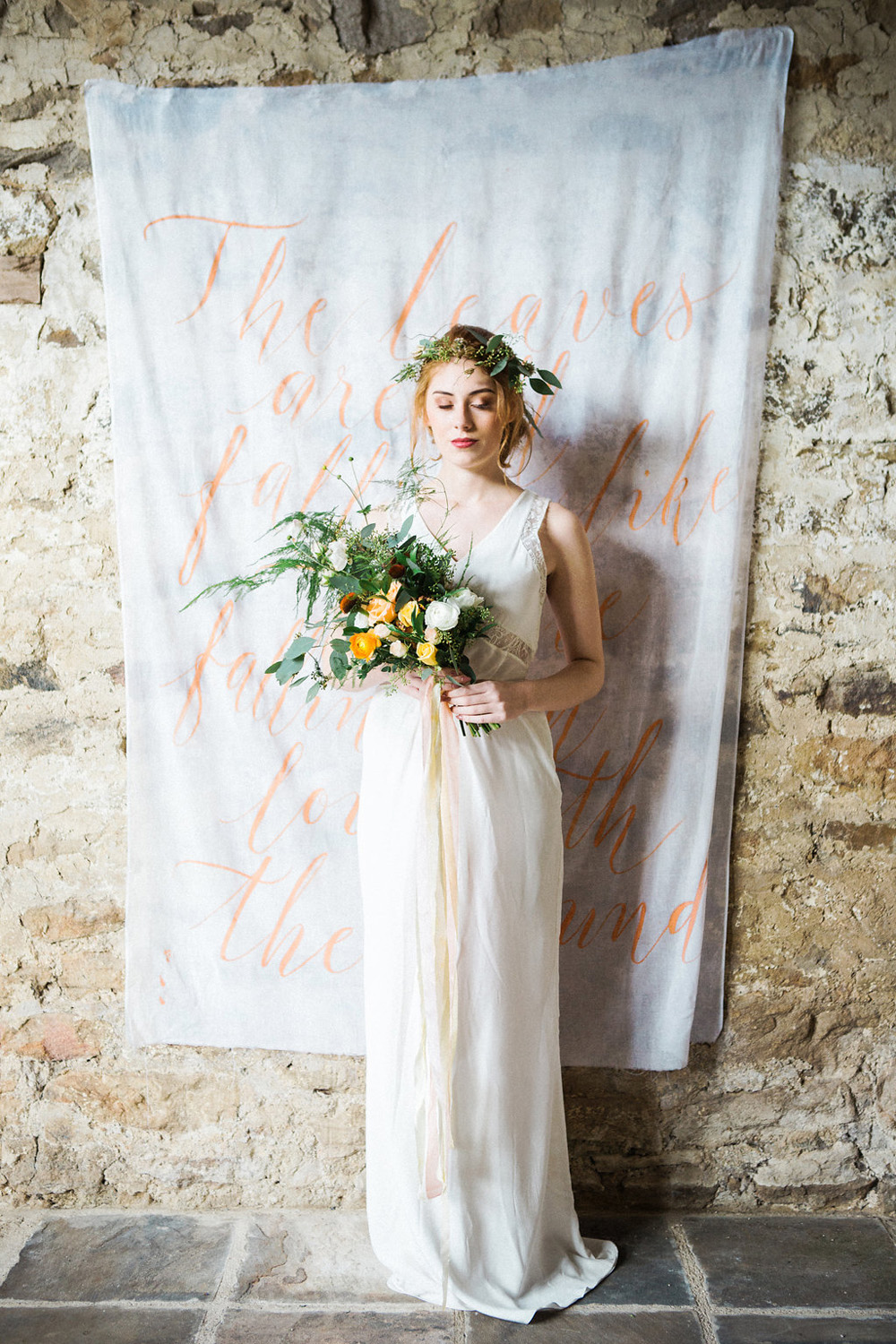 Over the summer I got involved in some larger scale and creative lettering, particularly with the team at Aspire Photography Training as well as on shoots for Melissa Beattie and Ashley Edwards. Some was tons of fun to do; it was all a learning curve. I find writing on muslin very difficult and won’t volunteer to do it again! 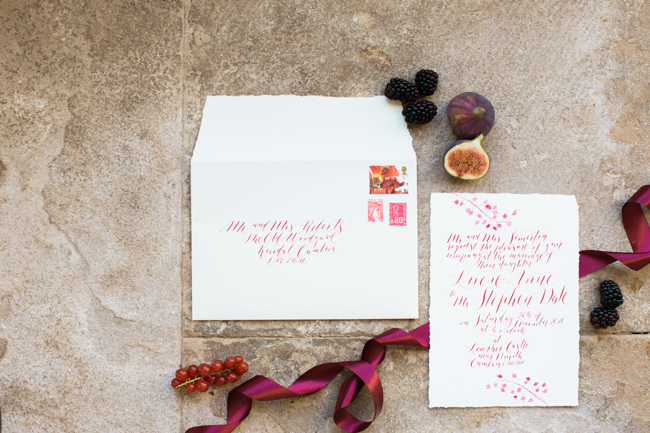 At Aspire I wrote on chalkboards for a shoot later in the year. That was fab – the trick is window markers rather than chalk or pens. The results are in the English Wedding Book.

Mirror writing was another hit in 2015 for real weddings. It’s a treat to write on mirrors and glass – they’re so smooth and the pen glides along glass so beautifully. But it takes very careful planning and a long time measuring up: my secret is dots of white marker to show measured spacing and masking tape instead of ruled lines. The logistics of mirror calligraphy are fun too (as UK courier companies won’t deliver mirrors without a huge fee) – one lovely customer came to meet me in a car park near the motorway; another collected their mirror from a Manchester calligraphy workshop; lovely Emma Tebbey collected an enormous Laura Ashley mirror table plan from my apartment.

Emma has been another highlight of my year. Her vision leads to some amazing creative projects. She asked me to write on pieces of slate for Askham Hall‘s brochure so I wrote a menu on a surprisingly huge chunk of slate as well as place names on smaller pieces. I also did some gold ink calligraphy – using my new Finetec palette – on navy card for a shoot with Taylor & Porter in Cornwall, which Emma styled.

The shoots mentioned above have led to some amazing coverage in top wedding blogs: Wedding Sparrow, Magnolia Rouge, Junebug, Love My Dress, Grey Likes Weddings and Style Me Pretty.

I really need to add a ‘press’ page to my website! 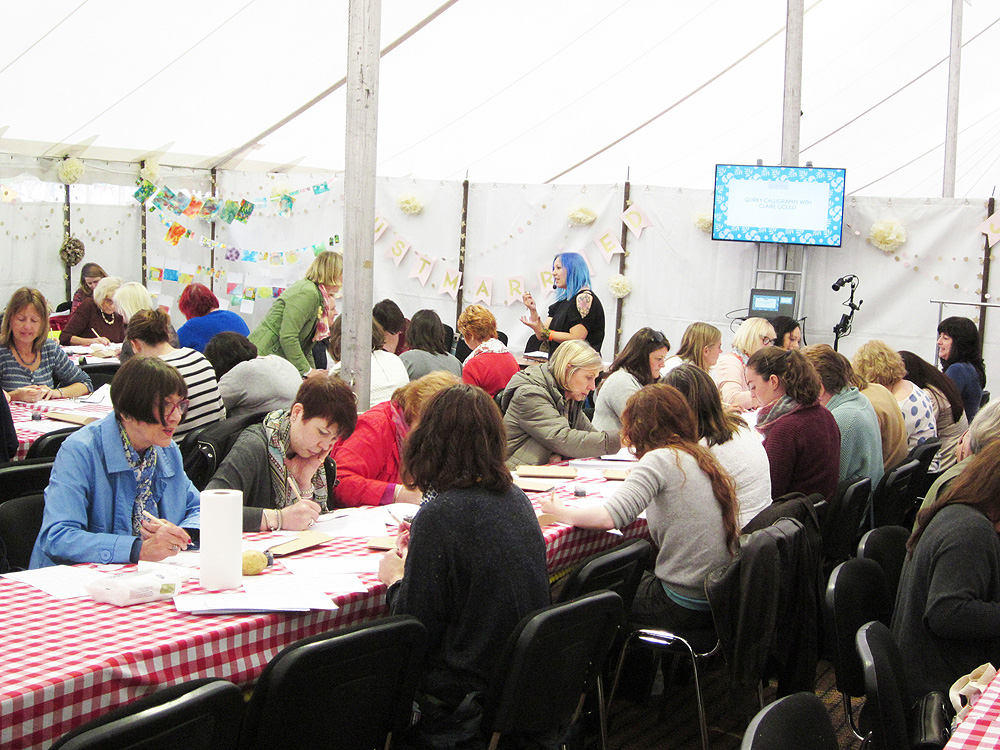 In early summer I signed up to teach at The Handmade Fair again. The plan was as last time: midday workshops teaching the very basics of lettering to 100 people at a time. We refined our kits to make setting up more streamlined. I was on the TV ad – which was hilarious – and before the event I had some calligraphy projects featured on Whimsical Wonderland Weddings and The Handmade Fair’s own blog. The show was a whirlwind; our workshops were one of the best-selling in the wedding tent, we even met Kirstie Allsopp very briefly as she swept through the green room on her way to the big top for a show.

Teaching at The Handmade Fair is very rushed. It’s loads of fun – but I don’t think you can really teach enough in such a short time period. I’ll happily hand over the gig to another calligrapher next year. I prefer teaching workshops in smaller groups now, and my Manchester workshops have been fantastic. The first, in August, was a trial run for The Handmade Fair but went so well I held workshops in October, December and January, and there are monthly workshops planned for 2016.

The most recent workshop was so much fun: my friend Paul Kyte came along to make a film of the day to showcase the workshops, and I was really pleased with how it turned out – thrilled, in fact! I didn’t pull weird faces or sound like a crazy person… and he made the workshops look pretty, exciting and fun! (Which they are!)

A final highlight to 2015 – and a great way to end the year on a high – came from my first workshop in August. Illustrator and cake designer Amy Swann came to the very first workshop and brought along some floral illustrations which blew me away! She asked me to write a calligraphy logo for her, which I did, and we then worked together on a series of styled wedding shoots and got to know each other’s work well. So in November Amy & I hatched a plan to design some cards and prints to sell for Christmas. 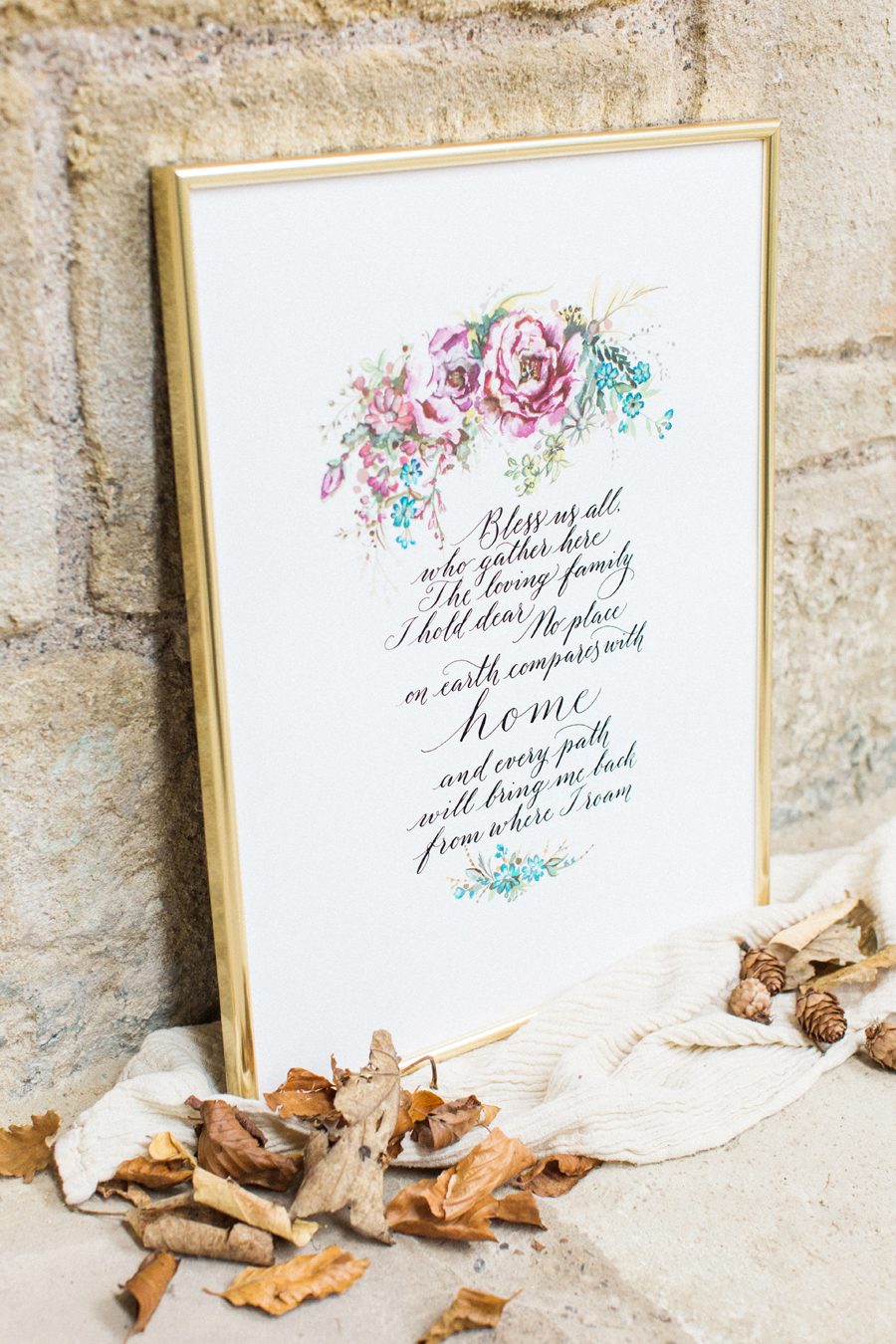 Amy illustrated floral wreaths and borders, and I added calligraphy and arranged for everything to be professionally printed. We sold a few of everything, and most are still available on Etsy – but the main hit was our calligraphy family tree. This flew off the shelves at Not on the High Street as a Christmas gift and is still on sale now. 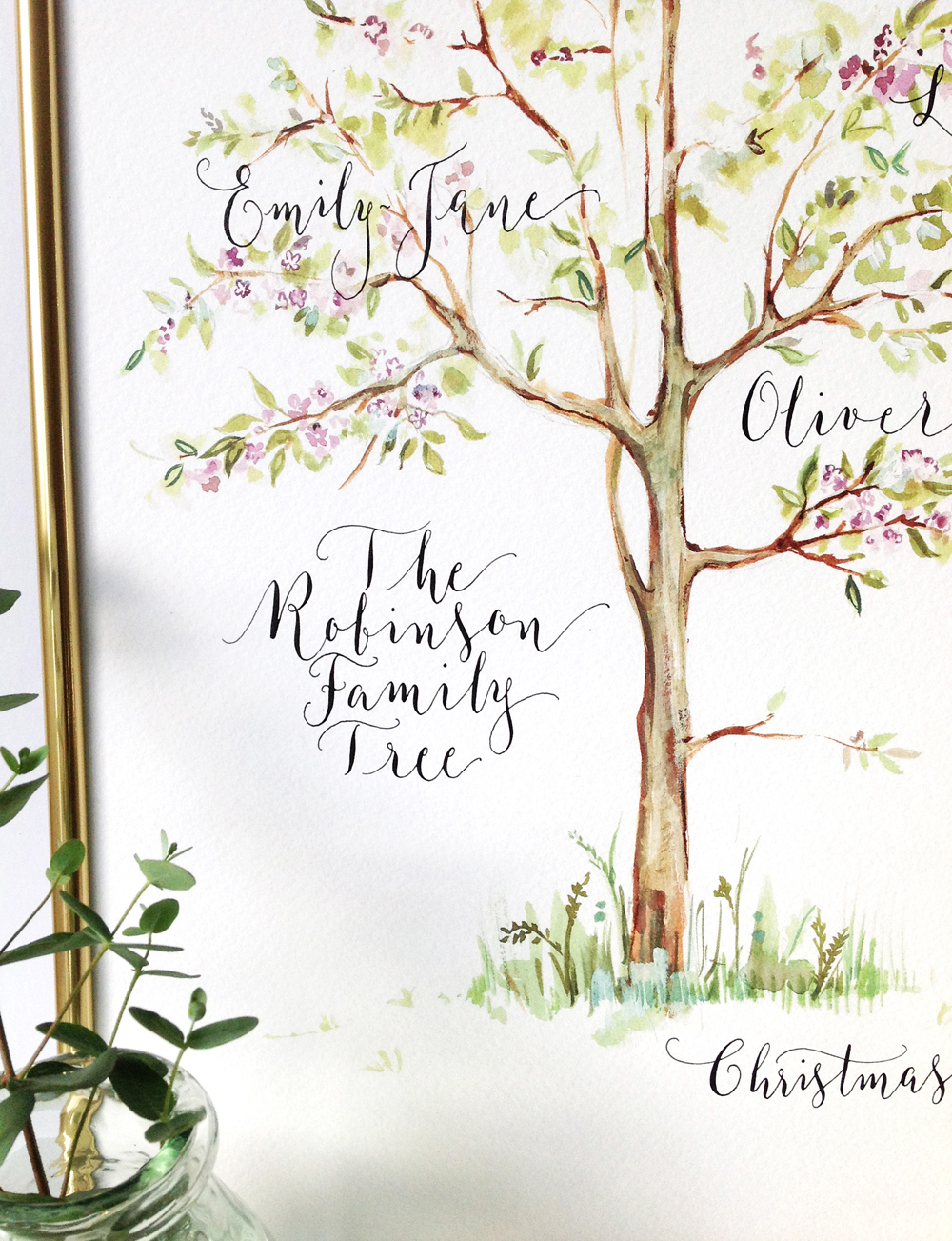 2016 will bring new challenges. My main focus will be: 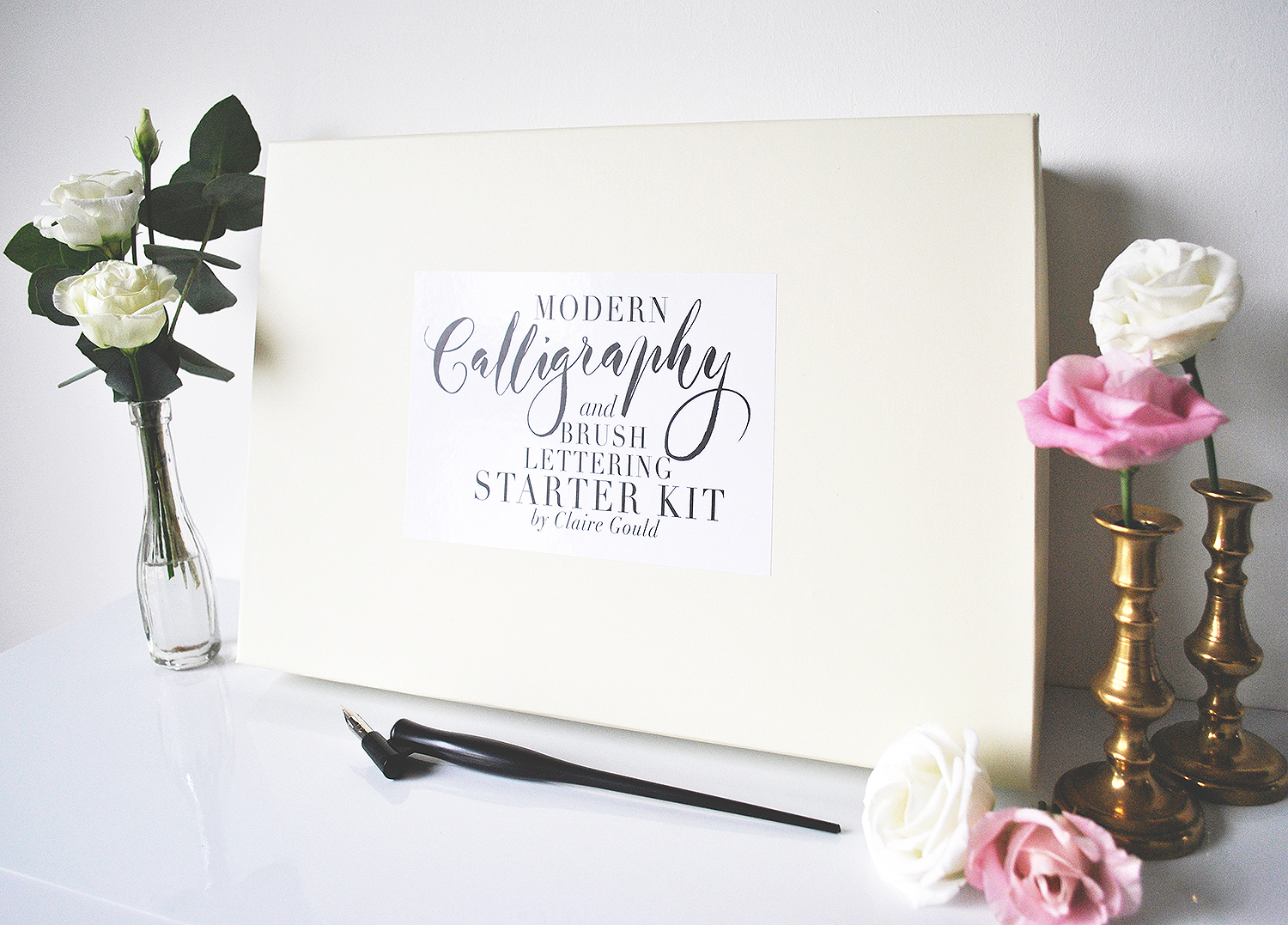